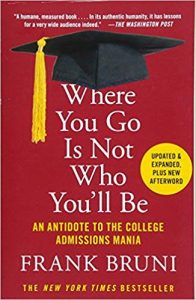 New York Times columnist Frank Bruni authored a book back in 2016 titled Where You Go Is Not Who You’ll Be: An Antidote to the College Admissions Mania. I was alerted to the book today because Amazon tracks my interests, which include rankings of colleges and universities.

So, presumably, I’m one of the people Bruni needs to convince, as his self-explanatory title makes clear, that getting into an ultra-elite school is overrated and that other factors can allow you to succeed spectacularly in life even without a degree from such a school.* As far as this goes, I would agree: I personally know people who have succeeded at the highest level of the academy and business who did not go to ultra-elite schools.

Still, it seems that Bruni may be the wrong messenger for this news. Bruni went to the Ivy League Columbia for graduate school (ranked #2 nationally by AcademicInfluence.com) and the University of North Carolina at Chapel Hill for his undergrad (ranked #26)

For high school, Bruni attended the prestigious Loomis Chaffee in Connecticut. Loomis Chaffee merits not only a Wikipedia entry for the school itself but also for its notable alums. Loomis Chaffee’s annual tuition charges are impressive: $47,440 for day students and $61,760 for boarding students.

Bruni laments the extreme competition students face to get into the ultra-elite schools. He and I hail from the same generation, so we’ve witnessed first hand how the competition to be admitted as an entering freshman at these ultra-elite schools has increased significantly in the last 30 to 40 years. And certainly, one’s life is not over if one doesn’t get into these schools.

That said, if I were to bet on future success and only had to go with whether a student had made it into an ultra-elite school, I’d bet on those who had rather than those who had not. Take annual salary. Annual average earning of graduates from Bruni’s Columbia is $107,600. Compare that to the top state schools in my adopted state of Iowa: $59,800 (University of Iowa) and $53,700 (Iowa State University).

——————-
*So there’s now doubt about Bruni’s conclusion, here is the blurb at Amazon describing the book:

Over the last few decades, Americans have turned college admissions into a terrifying and occasionally devastating process, preceded by test prep, tutors, all sorts of stratagems, all kinds of rankings, and a conviction among too many young people that their futures will be determined and their worth established by which schools say yes and which say no.

That belief is wrong. It’s cruel. In WHERE YOU GO IS NOT WHO YOU’LL BE, Frank Bruni explains why, giving students and their parents a new perspective on this brutal, deeply flawed competition and a path out of the anxiety that it provokes.

Bruni, a bestselling author and a columnist for the New York Times, shows that the Ivy League has no monopoly on corner offices, governors’ mansions, or the most prestigious academic and scientific grants. Through statistics, surveys, and the stories of hugely successful people who didn’t attend the most exclusive schools, he demonstrates that many kinds of colleges-large public universities, tiny hideaways in the hinterlands-serve as ideal springboards. And he illuminates how to make the most of them. What matters in the end are a student’s efforts in and out of the classroom, not the gleam of his or her diploma.

Where you go isn’t who you’ll be. Americans need to hear that—and this indispensable manifesto says it with eloquence and respect for the real promise of higher education.

Speed Reading Prospects and Pitfalls —An Interview with Marc Slater

Resources for Going to College